The stage has been set, it’s a-ok to be gay and roll with the punches on the footy field (high-fives to Jason Ball and the increasingly-supportive AFL community). With this opens the flood gates for same-sex attracted footy players’ partners to join the footy hierarchy and reach the big time – as a member of the WAGs.

This is my story.

As a boy who hated my sexuality, and subsequently myself frequently, for almost nineteen years of my life – I always looked for ways to avoid being in a strongly heterosexual environment for fear of my ‘gayness’ being written all over my face in such a place, and having some strong burly straight-y kick my head in. So pretty early on in my teenage years I had a realisation – steer the fuck away from the local footy club.

I think I can count on two hands the number of football games I’ve watched my brother play since becoming a teenager, quite simply because the rough and tumble of being on the spectators side of the fence was just as terrifying to me as the thought of being out there on the field myself. The dads yelling and swearing, players sticking around to watch the seniors’ game, I couldn’t envisage myself having fun around any of them.

Then I started dating the captain of a football team…fuck.

I put off the inevitable for as long as I could. I knew his teammates, the staff and everyone who mattered to him at the club had been nothing short of incredible since he came out to them, but in my head, it was an environment in which I had no right to be in, and so I expected the worst. As the skinny kid who has the kicking and catching ability level of a primary school student, I thought a sporting club would reject me immediately, no matter who my partner was. But ultimately the time had to come when I had to bite the bullet and watch a game.

After getting lost on my way to the ground, I arrived just before half time and stood awkwardly next to the car in the freezing cold trying to enjoy myself, ‘one hour to go’, I said to myself.

I skulked around the ground trying to keep as low a profile as possible – for me, no publicity was good publicity. But in the first of many random acts of kindness from those at the club, I was asked by one of the player’s girlfriends to join her in the club room to keep warm, and that’s where I saw it, my first glimpse of heaven at the footy club – there in front of me were the WAGs.

In their natural habitat, a WAG (that’s ‘Wives and Girlfriends’ for those playing along at home) is the prettiest girl in the clubroom, dressed to the nines and has the tendency to drink copious amounts of champagne to make it through two and a half hours of football – this is where I wanted to be.

Feeling comfortable in the footy club happened immediately after meeting these women. They were kind, generous ladies who took me under their wing from the get-go, to them I was just another partner at the club. From that moment on, the football game going on in front of us came second to socialising.

A setting that for so long in my life held only fear and anxiety was fast becoming a place I felt accepted and could actually have fun. That was sealed with a kiss on the cheek when our partners came in from the game. Not one batted eye.

One cocktail night, two player’s balls, a president’s lunch and countless footy games and beverages later and the more people I meet, the more I can’t help but be ashamed of the expectations I previously held for this footy club. After so many years being uncomfortable and ashamed about who I was, I expected others to feel the same. I sentenced myself to feeling anxious about what others may think of me before even knowing who they were – and there are a lot more good people out there than we may think at times.

For a football club to now be a place where I feel free and safe shows how far society has come over the years. Environment doesn’t breed stigma or intolerance, people have that right to choose who they want to be, and how they treat other people.

To anyone living in perpetual fear about hiding their sexuality, or those who feel they have to keep their relationship with someone they love a secret, hear this; footballers only choose the best to be their arm-candy, you are that arm-candy. For me, WAG life has become a treasured part of my life experience; you hang out with your friends, watch your man do all the hard work on the field, and drink yourself stupid at the luncheon put on for you by the club – and then after the game pretend you watched the game and congratulate your partner on the great mark or tackle you hope they did.

There are always going to be environments and people you find in your life that treat you with the love and respect you may often think you don’t deserve. But once you are ready to love yourself, there are others ready to do the exact same.

People may choose to butt in and have a problem with who you are, or the relationship you are in, but really that is just their sad truth. There’s nothing wrong with love, the true crime would be in hiding it or letting someone take it away from you.

The WAGs are waiting for you, trust me, it’ll be the best thing you ever do. 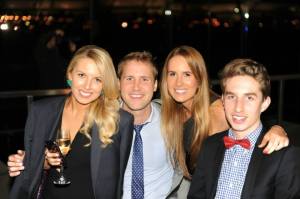