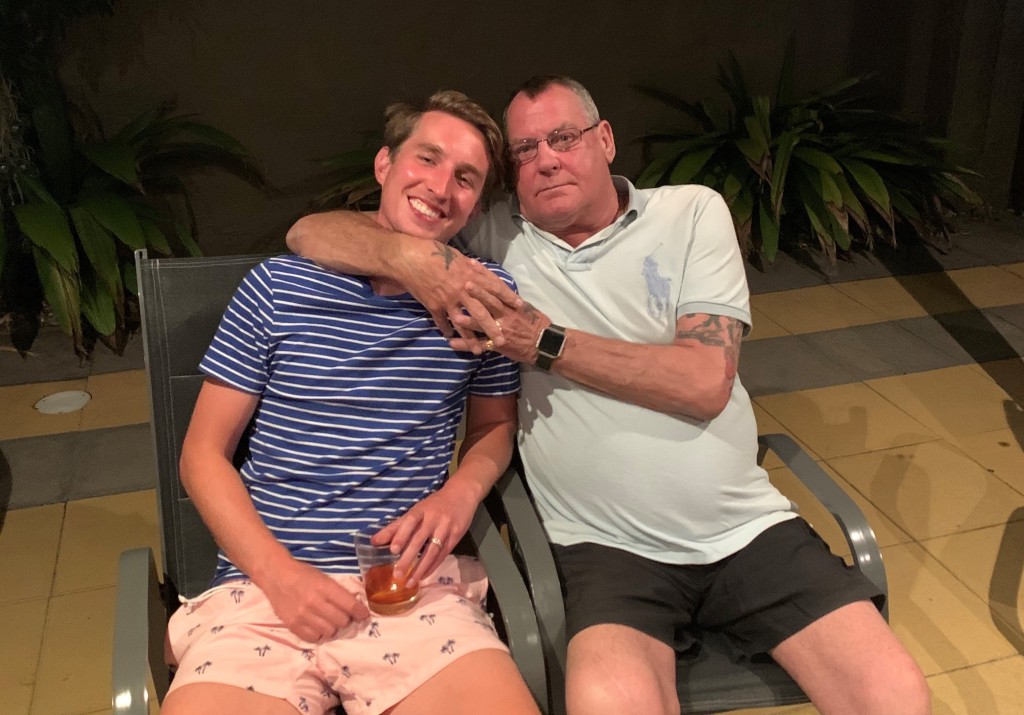 There are people in this world that you were destined to meet,

People who, no matter what you did, your path was bound to cross.

Whether it’s through going to school together, running in a similar circle, sharing a relation, or sharing a passion,

Come hell or high water, the world could never keep the two of you apart…

Andrew Towner and I were probably never those two people.

Despite living in the same city throughout our lives, I’d be shocked if there were two people who lived more differing lives in the state.

There’s also the fact that he’s a rough-and-tumble dude with calloused hands from growing up working as a brick-layer and a bouncer, with a hardened body and soul made for the dog-eat-dog world he lived in,

Whereas I’m the slight, wary gay, who grew up in Surrey Hills, preferring to get blisters from holding a pen too tight when pouring out feelings into a notebook, with a mind and muscle-mass that can barely make it through the day without crumbling.

Then someone up there had a hilarious idea, and one fateful day in 2018, Andrew Towner became my father-in-law.

I thought my partner and I were different – then I met his family.

Walking into their home for the first time, some seven years earlier, preparing to do the whole ‘meet the parents’ bit, way away on the other side of the tracks, I felt like the shakey-legged antelope entering the lion’s den.

An unsure twenty-one-year-old, walking into a family of five that devoured people like me for breakfast.

And whilst I wore my best skinny jeans for him, and he offered me a can of VB – something clicked, and I immediately felt right at home,

And so, the Odd Couple came to be.

When my life (somehow) intersected with Andrews, it changed forever – for the better – and I’ve been counting my blessings ever since.

The man could’ve eaten me alive, and he definitely gave it a go,

He tested and prodded, wondering what on earth this preened, colourful thing was doing sitting across from him at the table in his garage,

Feeling me out and making sure I’d fit into the Towner-world I had wandered into.

But as I worked my way past the exterior of the type of man I’d had nightmares of my entire life, I realised that underneath was a heart of gold.

I realised that below the surface, we were far more similar than I could ever have imagined.

I learned pretty quickly that when someone comes into your life, from somewhere you don’t know much about, you get the opportunity to learn about, and experience, a whole new world.

With Andy I could hear about bar fights, and arrests, friends who lost fingers, and running away from home,

And I could tell him about the children’s book I had written about a peacock named Peter.

We couldn’t be more different – and that’s the best part,

Because it helped us see the similarities that bind us together even more clearly.

For a writer whose sheer existence relies solely on the belief that kindness is the ultimate strength, and that love is the most powerful healer in our world,

My biggest flaw is that too often I am consumed far too deeply within my own fears and anxieties to verbalise what is loudest in my heart.

To let those who mean the most to me, know exactly how special they are.

The ones who get me through life, seem to be the ones I get most tongue-tied around,

Almost being too important to me, that I fear something about ever verbalising gratitude for what we have.

I spend my life revelling in their friendship, their love, and the gifts they bring, yet tip-toe around ever thanking them for that.

Why is it so hard to be open and honest with those we love about the things that we love most about them?

Whether it’s believing that they’ll always be there, and falling into the ‘one day’ mindset,

Or enjoying the right now too much to ever really think about what’s next,

I’ve found that when you open up and verbalise these things, it sets into motion a chain reaction of love,

Of people realising the power and importance they have, just from being here,

And of realising within yourself, how fortunate you are to have these people in your life.

We may always think we know how others feel about us, or vice versa,

But until they hear it from our mouths, or we from theirs,

There is always a danger of leaving behind a grey area, and of people not knowing how truly special they are.

And so, as uncomfortable as it was for me, I decided that I needed to make a change in my life,

I decided I needed to open up about more of the good, and to express the appreciation I have for those around me.

Because I was only old enough to stop and truly realise how much my grandfather meant to me when his mind had already been taken away in its deep descent to the pits of Alzheimer’s,

And life took away my uncle before I ever mustered up the courage to tell him how inspiring his story and his strength was to me.

And so, I vowed to never again let a word go unsaid.

Vowing to say words when they could be heard,

To reflect on people when they could still be seen,

And live in their light before it was extinguished.

I will never be ready to go until the people who mean the most to me, know exactly how important they are,

And if life has taught me one thing, it’s that it will not wait for it to be wrapped up nicely, and sent off with a bow around it.

It’s never, ever, promised to us.

Age is a gift denied to many,

And the batteries in our clock will run out at some point.

To think that it won’t, only means that we will be unprepared for it when it does.

So the sign you’ve been waiting for to let someone know how you feel,

The sign to stop, to reflect, and to open up,

We hear it every day:

‘No Day But Today,

‘You Only Live Once’,

So much so that these expressions have become overused,

Yet, corny as these statements may be to hear, the truth within them remains.

Our one chance to make these memories,

To forge these connections,

To live this love.

There’s no re-run, no do-over,

This isn’t a dress-rehearsal, and there’s no edit button.

It’s our time now to speak up, and to shed any fears or anxieties we may have about doing so,

Because loving and being loved is never something to apologise for.

We fill our minds with so many imagined interactions, that we rarely end up having them,

So now it’s time to get out of the inside of our heads, and instead use them to the best of their abilities.

To cast the imagined fear of rejection aside, and live more fully in the reality of the love I have in my life.

Because I’d rather go to my grave knowing that the people I’ve left behind know exactly how I feel and felt about them,

Than ever leave them wondering if they ever really meant that much to me at all.

Andy’s one of my favourite people in the world mainly because it would seem that he shouldn’t be,

It’s been so refreshing, over the nine years I’ve known him, to be reminded that you don’t need to have loads in common, share the same ideas, or ideals, or thought processes to have a bond and a lasting relationship with someone,

To be reminded that our differences are what make us unique, and that there are more powerful forces that bring us together.

Andy looks like something I should fear; imposing, tatted, rough,

And yet he has turned out to be one of the most caring figures in my life,

And one of my most vocal supporters.

On paper it shouldn’t ever work, and yet somehow it has.

Somehow with him I can be calm and relaxed, and appreciate what my life has gained by having him in it.

Meeting him has shown me that you never really know what’s coming your way, or what life has in store for you,

And that’s what makes this journey so endlessly interesting and exciting.

We each have our strengths that we flaunt,

And our weaknesses that we bear.

Things about ourselves that we show-off,

And other parts that we keep hidden away.

And whilst the world likes to showcase the best of the best, in all their unfailing glory,

I’m far more interested in what someone does with their life in spite of their flaws, than someone who spends their whole life trying to be flawless,

Working tirelessly to be everyone else’s vision of a perfect human, whilst ultimately ending up being nothing but a shell.

I think it’s a far more genuine life, and a life more fully lived, knowing exactly who you are, what you stand for, what you don’t,

And living that way,

Whilst still continuing to make a positive contribution to the lives of those closest to you, and those around you,

Everything external about Andy and myself proves that we are so different, and quite clearly so.

But it only took a little digging to see that our insides matched,

And witnessing the love he has for his family, his friends, and his art of being there for whoever needs him, was all I needed to know to get to the core of him.

It was on a holiday recently that, as he often does without knowing it, Andrew found a few choice words that put it all into perspective.

For a man that loves dropping f’s and c’s like they’re going out of fashion,

He somehow always has the right words to say at precisely the right moment.

When I offered to move out of an over-crowded house on the annual Towner vacation to free up a bed,

He told me plainly, “You don’t split up the Towners”,

And it was clear.

When you come into a new family, you see a completely new perspective of how a family works and operates.

And I have been lucky enough to become a part of a new family that has an undeniable bond,

One that has been created by good parents, by Andrew,

Who sits at the core of it all.

A group and a team that has each other’s back every day,

Fighting for each other, as hard as they fight with each other.

And no matter the size or the severity of the bumps,

The arguments or the missteps,

The family that Andrew has allowed me into, has taught me more about family than I have ever known,

He taught me that you don’t split up the Towner’s,

That you can’t split up the Odd Couple,

Fuck this is going to be uncomfortable.